Bára Sigfúsdóttir (°1984) is an Icelandic choreographer who studied contemporary dance at the Icelandic Academy of Arts, in the Amsterdam school of the Arts and lastly at P.A.R.T.S., the school of Anne Teresa de Keersmaeker in Brussels, where she focused both on dance training, movement research and choreography.

Bára has a unique way of researching and composing movement material which is articulated and eloquent, musical and one of a kind.  She creates out of a necessity to communicate towards an audience which gives her the potential to find truly unique movement material, evoked by improvisation processes. With this approach Bára positions herself within the dance field as many choreographers of today use and repeat recycled material. Her focal point for the past years has been to work with isolations of smaller segments of her body, applying different rhythms and to construct a layered material which constantly transforms - moving between clarity and ambiguity. Her dance is visual and imaginative, and her pieces are accessible for a broad audience while simultaneously having a growing impact within the international contemporary dance scene.

Bára’s solo performances On the other side of a sand dune and THE LOVER have been presented at national and international venues and festivals, including Reykjavik Dance festival 2013, Stockholm Fringe 2013, December Dance 2013, ICE HOT Oslo 2014,  Performatik BE 2015, Theaterfestival BE 2015, Moving Futures NL 2015 and Theater Aan Zee 2015. THE LOVER was also selected for the prestigious Circuit X network, which enables 5 promising young theater makers to tour extensively in Flanders and the Netherlands.

As a performer, Bára has amongst others worked with Or and Oran dance company, Compagnie 3637, Miet Warlop (replacing in Springville), Quan Bui Ngoc, Iris Bouch & Kobe Proesmans, Aëla Labbe and Janne-Camilla Lyster. 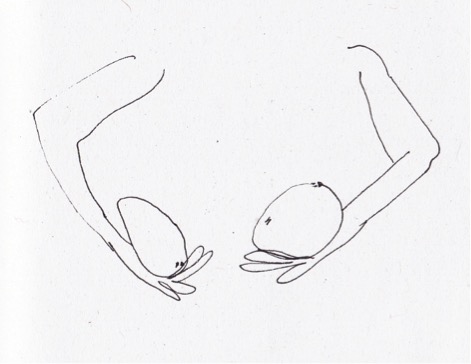 Rooted in an ongoing curiousity towards other cultures and the development of movement in different contexts than her own, Icelandic choreographer and dancer Bára Sigfúsdóttir travelled in 2014 to Teheran (Iran) where she took part in the UNTIMELY Festival. While teaching a workshop, she got intrigued by the skills and presence of two local artists, Masoumeh Jalalieh and SeyedAlireza Mirmohammadi. This experience planted the seed for an ongoing artistic affinity between the three of them, resulting in being, Bára’s newest creation where - for the very first time - she will not be performing herself but will rather direct the meeting between the movers on stage.

Every human being has a body. With this body we address the world and each other, it is the most primary thing which we share with one another. In being the body is the common ground to explore and to put in dialogue the West-European with the Iranian and by extension the Middle-Eastern culture and society. Used as a poetic generator of subtext, the moving body can express different layers of sensations and experiences. The meeting between bodies, between the two people on stage but also between them and the audience, will serve as a sober gesture. A place to explore what we share rather than to underline our differences.

production GRIP coproduction Vooruit Arts Centre/DNA - Departures and Arrivals, DansBrabant, DANCE ON PASS ON DREAM ON, workspacebrussels/Life Long Burning, Moussem Nomadic Arts Centre, de Grote Post, C-TAKT with the support of fabrik Potsdam, Platform 0090, Grand Theatre and CAMPO with financial support of the Government of Flanders, the Embassy of the Federal Republic of Germany, the Creative Europe Programme of the European Union and the city of Antwerp thanks to Andrean Sigurgeirsson, Martin Blank