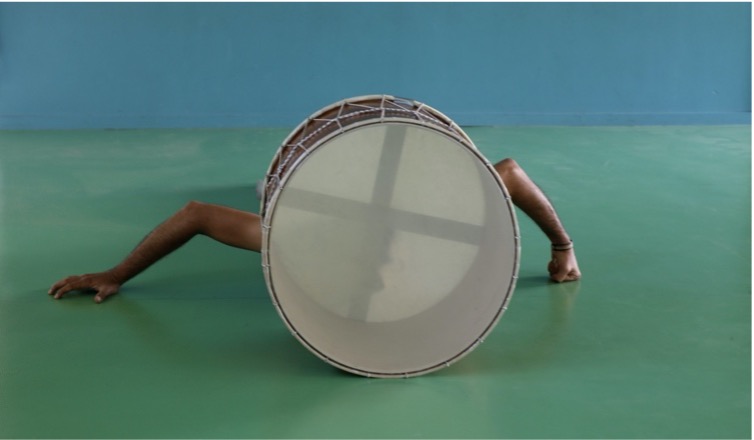 DAVUL (drum) is one of the oldest instruments since our existence, prehistoric times.

The thymus is an organ found in mammals between the sternum and the trachea in the anterior space between the two lungs. The thymus gland is one of the most important organs in the immune system. The thymus takes care of the elimination of unwanted autoreactive clones. In addition, it produces hormones including thymosin which stimulates our immune system. The communication tool to educate cells. Latest research findings tell us that those hormones are also responsible for feelings of satisfaction and happiness. To produce these "happiness hormones", a simple movement is enough, namely tapping our chest. Like the monkeys or homo sapiens did or still do, to communicate.

How can we understand our actions, daily life and communication as social beings?

No reference that I have consulted to address this fundamental question could allay my fear and unease.
I found no holistic conclusion to grasp the world. The structures and references created by humans throughout history have always been based on a previous thought system and have laid the groundworks for the formation of the next system. Every universal value that is formed and accepted, forms a line to the next historical stage.

This thought brought Hüseyin back to the beginning of human existence, the first moment when man begins to define himself and others. He went in search of the first way this happened. What was the first contact between us and life? What did we want first? What structures and references did we form first?

It is obviously not possible to return to the moment when we identified ourselves with our consciousness. But wouldn’t it be possible to try to return to an essence anyway, and to examine the references created from there?

Thus, he arrived at the basis of all life: the universe as a collection of vibrations.

In DAVUL we attempt to make vibrations in different frequencies visible and to investigate how this changes the consciousness of our humanity. We will do this in different ways, starting from different types of vibrations: the vibration of a drum, voice, body and image. By making vibrations audible and visible, we want to recall and redefine the initial agreements between us as humans and nature. Communication is reinvented, we enter into discussion with the past.

To make the universal frequencies visible, audible and tangible and to return, as it were, to the first fundamental awareness of existence and the first contact with the world, we choose the davul as a partner for Hüseyin as performer. The davul is an organic percussion instrument from Turkey. It is still being used in its original form and function; a large drum consisting of two sheets and a wood construction. During the performance, the davul interacts with the voice, physical material, images and movements of the human body.

All of this happens amidst an interaction with an installation by Christoph De Boeck. About eight iron plates are placed in a crescent around the davul. They are machines that generate movement and sound and vibrate just like the davul. The closer you approach a plate, the more it vibrates and the louder it sounds. Thus, performer and plates can create a sound performance through movement. The research that I do as a performer with my body and the davul is translated to the plates and the space, and in this way broadened.

We combine the vibrations of the davul and the spatial installation with different methods of communication that humans have developed throughout history: from movement (body dance, halay) to image (physical sculptures with the davul, Chladni patterns, photo and video projection), sound and non-verbal language (dengbejs, morse code).