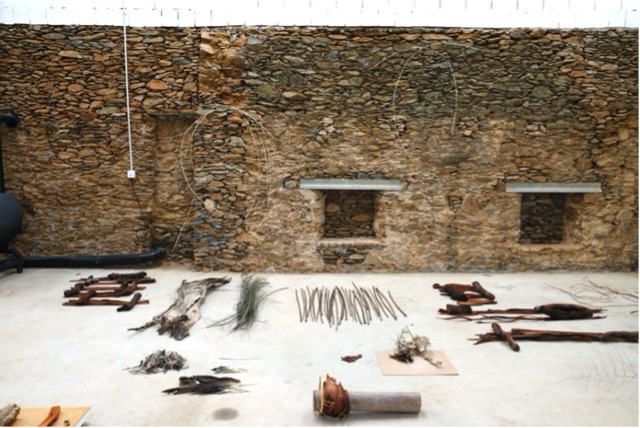 A few years ago Meryem Bayram became intrigued by an object she found on the beach in Turkey/Tekirova. A formal and aesthetically appealing object. No one could tell her what it was. She kept looking and recently came across a similar object on an etching from the Ottoman era where a ritual object – the Nahil – had the same shape in a procession. The industrial materials of the found object make the resemblance impossible. She realized that objects do not have a self-evident content, and that for her, coming from a diverse cultural background, “translatability of objects” is a basic issue. What meanings are given to the object, is there such a thing as a universal, utilitarian basic form and meaning?

This was the starting point of a long term research project in which she collect a “corpus” of sources of inspiration and forms that will make new performative, visual and installation work possible. Our relationship to objects and meaning is central.

For this she will investigate anthropological insights and methodologies. Research into “cultural appropriation”, how a different context and culture appropriates an object. Utensils arise within a certain culture and are shaped on the one hand from a utilitarian logic (what works best) but on the other hand from a cultural content (what does this object mean? in relation to the culture from which it arises). Meryem Bayram is especially fascinated by how meanings can shift, be filled in differently and sometimes also create new forms.

Producer Platform 0090 | With The Support Of The Flemish Government