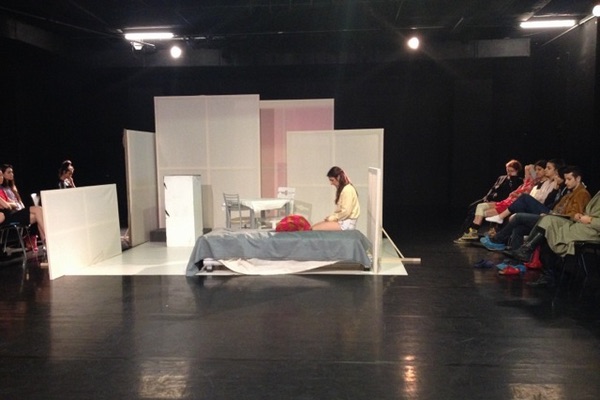 residency Mimar Sinan Universtity: 26 March  - 15 April 2017 - Clement Layes has been invited by Mimarsinan University (Istanbul, Turkey) to organise a workshop around his performance The Eternal Return.

Fellow man! Your whole life, like a sandglass, will always be reversed and will ever run out again,

-­‐ a long minute of time will elapse until all those conditions out of which you were evolved,

return in the wheel of the cosmic process.

In “The Eternal Return” Clément Layes and a group of collaborators use the theatrical apparatus to stage the different collective and individual rhythms we live by. In doing so, the performance aims to explore how we establish and maintain our singular and collective identity through the creation of rhythmic narratives and how, in the process of creating these narratives or refrains, we are always dependent on other individuals, things or rhythms. As such, the eternal refrain aims to lay bare the fragile and on-­‐going polyrhythmic process that lies underneath our subjective, objective and collective temporalities.

Each person will have their own course. Once they’ve entered, each person will stay and repeat their sequence. As the number of people starts to increase and form a crowd, these repetitive actions will start to intertwine and syncopate with each other, thus creating a plurality of possible temporalities and singularities. The attention of the audience shifts here, from the actual performers and their actions to the rhythmic relations that unfold between the performers.

The idea of the eternal return plays a central role in the work of German philosopher Friedrich Nietzsche. According to Nietzsche the idea of the eternal return can be horrifying and paralyzing, but it can also be the cause for eternal bliss if we accept or even love this fate and live every moment as if we would want to repeat it endlessly. With “The Eternal Return” we intend to propose a continuous meditation on this idea. Moving away from modernist obsession with speed, newness and invention – where ‘to stand still is to go backwards’ – we propose to search for the new in the repetitive: the new that comes by understanding the repetitive patterns we're imbedded in, patterns of action, behavior, politics; the new that comes from acknowledging the repetition. In doing so, we propose a temporality that isn’t

understood as a straight line, but rather as a constant process of re-­‐occurrence. ‘Everything straight lies,’ murmured the dwarf disdainfully. ‘All truth is crooked, time itself is a circle.’1

“The Eternal Return” will premiere in Berlin’s Sophiensæle on October 5th, 2017 with fifteen local artists on stage. A core team of seven performers will go on tour and invite eight local performers to join them: after a short workshop and rehearsal period of five days, an individual version of the choreography is being presented.

Like the moment of repetition never remains the same, “The Eternal Return” keeps on changing its shape and is refueled by the different contexts, it is performerd in.